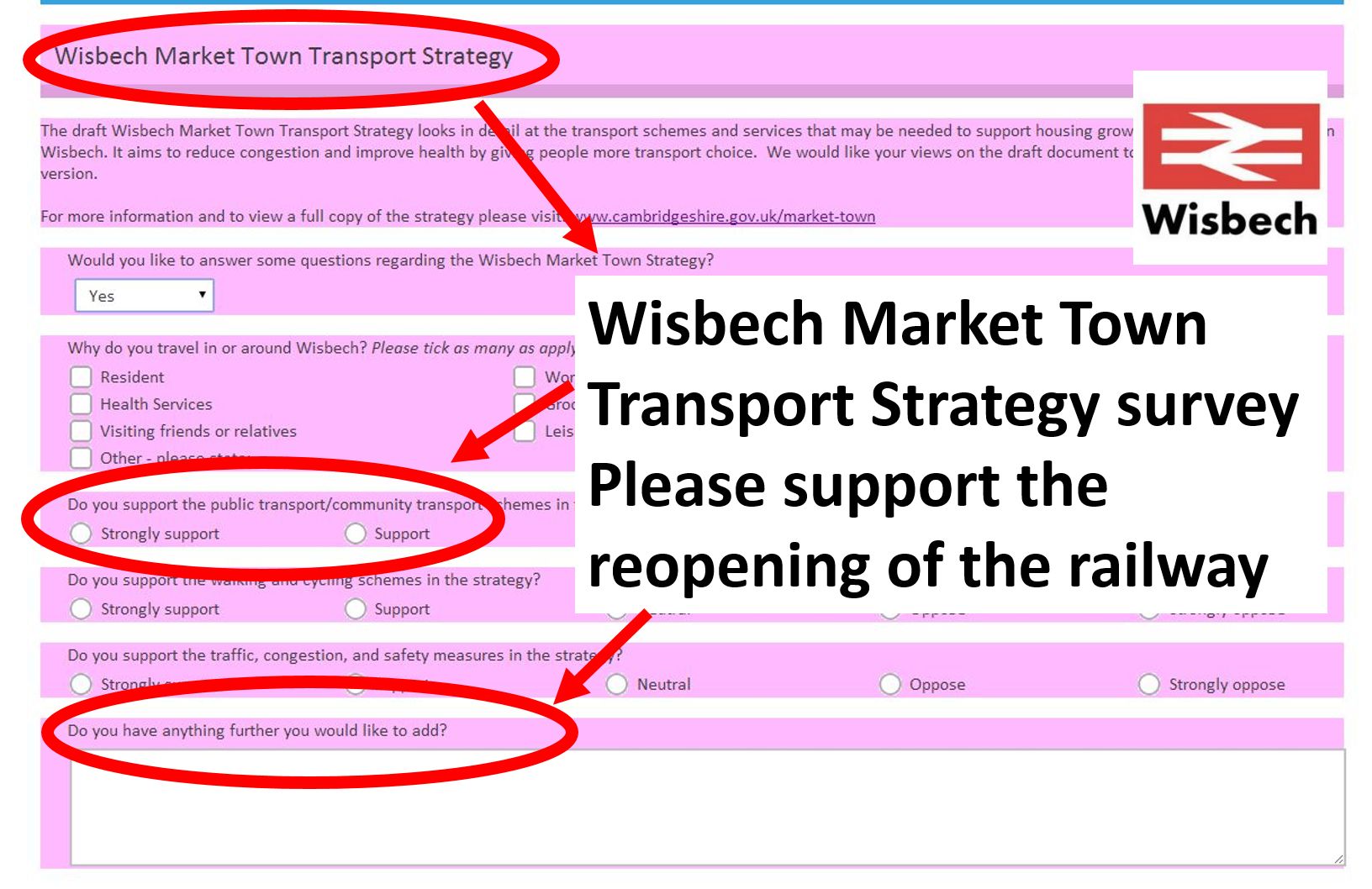 Cambridgeshire County Council are carrying out a consultation on the Draft Wisbech Market Town Transport Strategy which is an important opportunity to express your support for the reopening of the railway from Wisbech to March.

There are details here including an on-line survey which is open until 11 July 2014; you can fill in as much or as little of the survey as it relevant to you:
http://www.cambridgeshire.gov.uk/info/20006/travel_roads_and_parking/66/transport_plans_and_policies/3

The second page of the survey is for Wisbech with a question and free form text box relevant to the rail reopening; “Do you support the public transport/community transport schemes in the strategy?” and “Do you have anything further you would like to add?”. Although the first question sweeps all public transport into a single question, the text box can be used to express particular support for the rail reopening. Your own words will make the most impact and be most useful for the council in understanding why the line should be reopened. Here is an example for inspiration “A railway should be reinstated to enable residents to easily access Cambridge, London and the rest of the country for education, employment and leisure activities, and to bring people to the town for the same reasons”.

For background information there is a consultation leaflet which gives a high level overview of the plan, although the railway reopening is only shown on the map as “Study work on the possible re-opening of the Wisbech to March Railway Line”:
http://www.cambridgeshire.gov.uk/download/downloads/id/2829/wisbech_consultation_leafletpdf

The full strategy is here, with the reopening proposals detailed in section 6.6:
http://www.cambridgeshire.gov.uk/download/downloads/id/2830/wisbech_market_town_transport_strategypdf

6.6.1 The Wisbech to March Railway Line, known locally as the Bramley line, was in operation for passenger services between 1847 and 1968. The line continued to be used for freight purposes until 2000. There is currently no rail service of any form operating to/from Wisbech. There has been a desire expressed over a number of years to see the railway line reopened with passenger services available direct from Wisbech.

6.6.2 One of the key drivers for wanting to see the reintroduction of the railway is development growth. Wisbech has seen growth in recent years that has led to increased volumes of traffic, and it is considered that the  reopening of the railway may offer a solution to some local road transport issues, and help significantly in terms of accessibility and regeneration of the town.

6.6.3 Investigations into the case for reopening the railway between March and Wisbech have been carried out. The work to date has been divided into three separate studies.

6.6.4 Stage 1 investigated the potential patronage and revenue generated by a rail service between March and Wisbech. This Study concluded that a conventional rail service between March and Wisbech would be expected to generate net revenue of £1.07m over an appraisal period of 2016 to 2029. The light rail scenario appears the stronger performing option, due to the significantly lower operating costs and is forecast to deliver cumulative net operating revenue over the appraisal period of over £15m.

6.6.5 Stage 2 considered the capital costs of reinstating the line and providing a new station and included an outline assessment of the key benefits. This study concluded that the estimated capital costs including optimism bias of reinstatement of the line for passenger services, overhaul of the signalling and level crossings is in the range of £50-75 million depending on station location and whether or not an over bridge for the A47 is included or not. These costs are an early central cost estimate with a high degree of uncertainty. The overall Benefit Cost Ratio (BCR) of the scheme is in the range of 0.99 to 1.43 excluding revenue clawback. The scenario without the A47 bridge allied to the station in Wisbech performed the strongest.

6.6.6 Stage 3 looked into the wider economic benefits that a station would bring to Wisbech and the surrounding area. The primary indirect benefits have been calculated to be £39.7m (over a 60 year appraisal period) which increase to £56.7m if a direct service could be provided between Wisbech and Cambridge. Secondary indirect benefits through further land utilisation (than already allocated in the Fenland Local Plan) due to higher economic growth with the rail service than without leads to the following benefits:

6.6.7 Analysis shows significant value is placed by residents on having access to both social and economic opportunities through the rail service. The overall value could be in the region of £19.3m -£41.5m over a 60 year period.

6.6.8 Overall benefit cost ratio when the results of stage 2 and 3 studies are combined the BCR of the scheme looks to be in the range 2.3-3 excluding revenue clawback. The scenario without the A47 bridge allied to the station in Wisbech performed the strongest.

6.6.9 The next stage is expected to involve a Level 2 (GRIP2) Feasibility study subject to securing funding to undertake this work. This work would look in more detail at the options and their relative costs and benefits, however funding is needed in order to progress this work further. Updated information will be available at: http://www.cambridgeshire.gov.uk/info/20051/transport_projects/68/transport_funding_bids_and_studies/3